Home » U.S. debates a summer booster for people under 50 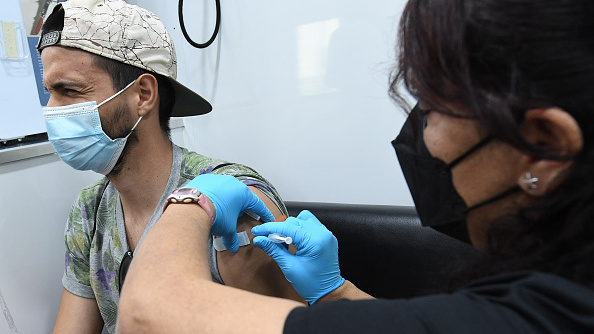 U.S. debates a summer booster for people under 50

People under 50 might have a chance at a second booster shot the summer depending what federal health officials decide. Those 50 and older have been eligible for the shots since March.

People under 50 might have a chance at a second booster shot the summer depending what federal health officials decide. Those 50 and older have been eligible for the shots since March.

The Biden administration is trying to decide whether to make a second COVID-19 booster more widely available to protect more people against the latest surge driving up infections and hospitalizations this summer.

Anyone age 50 and older — and anyone 12 and older with a weak immune system — has been eligible for a second booster since March. But most people younger than 50 couldn’t get one. That could now change. NPR learned that federal officials are currently debating the move.

Proponents of expanding booster eligibility say the nation urgently needs to boost as many people as possible because of the threat posed by the most contagious version of the coronavirus to emerge yet, known as BA.5.

Skeptics doubt another booster of the same vaccine will provide much added protection to most people. Some also worry another shot could backfire, by training the immune system to only fight the original strain of the virus. There’s also concern getting another booster now may interfere with efforts to roll out the next generation of boosters that target omicron in the fall. For most people younger than 50,the protection they got from their first three shots has been wearing off. In fact, a new study released Tuesday indicates the antibody response fades substantially within three months. So with infections surging again amid widespread transmission of the BA.5 variant, federal officials have been debating whether to open up eligibility to protect more people through the summer.

“What else can we do to reduce the likelihood of serious illness?” asks Michael Osterholm, a University of Minnesota epidemiologist who has been urging federal officials to loosen booster eligibility. “Boosters are, I think, the obvious answer.”

Some other infectious disease experts agree.

“There is as much COVID around now as almost at any time. People are no longer being as careful as they were. We know that immunity wanes over time. We have a variant that is capable of evading immune system. We have good evidence that a second booster lowers the probability of a severe case,” says Dr. Robert Wachter at the University of California, San Francisco. Wachter thinks the government should offer second boosters to all adults. Others think boosters should just be offered only to those at high risk. “I don’t think it would make much sense for a perfectly healthy 25-year-old person to necessarily get a boost now,” says Dr. Anthony Fauci, the White House chief medical adviser. “There’s a difference between a perfectly healthy 25-year-old person and a 43-year-old with chronic obstructive pulmonary disease.”

But other infectious disease experts argue there really isn’t good evidence that a second booster would enhance protection much for most otherwise health people. And, they argue, three shots are still protecting most people from getting severely ill and dying.

“The goal of this vaccine is to protect against serious illness. If we’re going to try to protect again mild illness for years then we’re going to have boost a couple times a year and that doesn’t make sense from a public health standpoint,” says Dr. Paul Offit, who heads the Vaccine Education Center at Children’s Hospital of Philadelphia.

And there is concern that if people get the same shot too many times it could be counter-productive — by kind of training their immune systems to only try to fight off the original strain instead of protecting against new variants. Although this remains a theoretical risk, some say the evidence that it might be real is growing.

“There’s this phenomenon of imprinting also known as original antigenic sin where if you continue to give doses of the same vaccine you could in a sense trap the immune system of wanting to respond to the original virus and not adapting as well to future variants,” says Dr. Céline Gounder, an infectious disease specialist and a fellow at Kaiser Health News.

A final concern concerns public messaging: Giving people another booster now may confuse things in the fall when the government plans to roll out the next generation of vaccines. Those will likely be bivalent vaccines, meaning that have been updated to target omicron along with the original strain of the virus. The idea is to try to protect people against what could be another bad winter surge.

And if people get boosted now, in mid summer, there may not be enough time in between the shots — since people may have to wait months in between boosters for them to work. (There’s disagreement about this and no good evidence for what is the optimal interval.) “The spacing between boosters is important,” says John Moore, an immunologist at Weill Cornell Medicine. “One reason is that the response to a vaccine dose is impaired when the level of antibody in the blood is too high.”