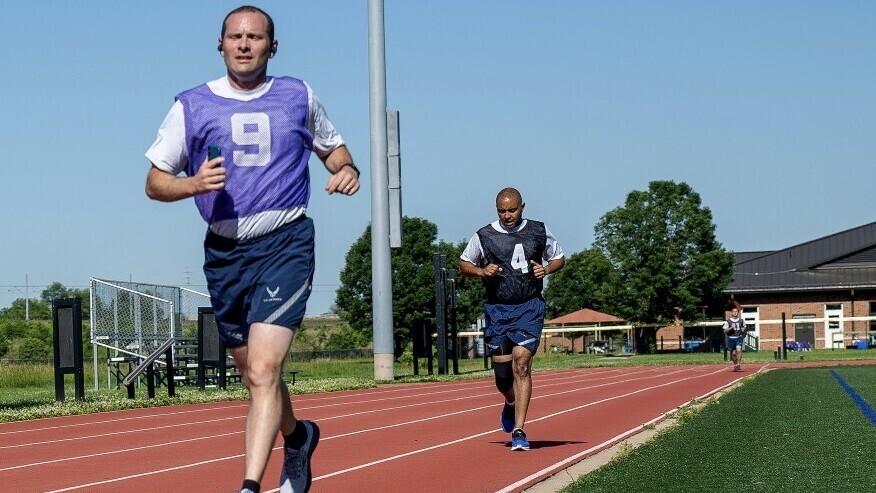 Air Force service members run a timed 1.5 miles during their annual physical fitness test at Scott Air Force Base in Illinois in June. The U.S. Space Force intends to do away with once-a-year assessments in favor of wearable technology.

Air Force service members run a timed 1.5 miles during their annual physical fitness test at Scott Air Force Base in Illinois in June. The U.S. Space Force intends to do away with once-a-year assessments in favor of wearable technology.

Annual physical fitness tests are a cornerstone of military life. Each service has its own take on the once-a-year assessment required by the Department of Defense.

But the country’s newest military branch is ditching that model.

Members of the Space Force, called Guardians, won’t have an annual test. Instead, they will get smart rings or other wearable fitness devices to keep track of their physical activity throughout the year. The devices also will be programmed to give feedback about mental health, balanced eating and sleep.

U.S. Space Force leadership says the approach will prioritize the general wellness of service members beyond just one physical assessment each year. The annual tests have spurred eating disorder symptoms and other unhealthy behaviors in some military members.

“This program will promote not just physical fitness; it will pair fitness with robust education on diet, sleep hygiene and other physiological factors to promote social, mental and spiritual health as well,” wrote Patricia Mulcahy, the Space Force deputy chief of space operations for personnel, in a memo.

The change is still taking shape and won’t be fully implemented until 2023. Until then, Guardians still have to complete one more Air Force fitness test — a timed 1.5 mile run and one minute each of pushups and situps.

“We’re still using the Air Force PT standards. The difference is in our approach,” he said.

The Space Force has been testing Garmin watches and Oura rings for its program. It also plans a digital community where Guardians can see data from their own fitness trackers and compare it to their peers.

Austin-based FitRankings is building that online platform, which will allow Guardians to get credit for activities they normally do, rather than assessing them on specific exercises during the annual test.

That was a key frustration Hitchins said he heard from military members about fitness tests. FitRankings seeks to alleviate it by converting any physical activity into a MET minute, a measure of energy expenditure.

“Guardians could do any type of activity,” Hitchins said. “We could convert it into this metric and then create a culture-building, community-engaging challenge around that data.”

Some in the Space Force expect Guardians to use the data to take more ownership of their overall health, said Maj. Gen. Shawn Bratton, commander of Space Training and Readiness Command, who has been testing fitness tracking rings.

A member of the Air Force 18th Component Maintenance Squadron wears a Garmin watch and an Oura ring as part of a 2021 study. The Space Force is evaluating wearable devices from both manufacturers to monitor troops’ health.

A member of the Air Force 18th Component Maintenance Squadron wears a Garmin watch and an Oura ring as part of a 2021 study. The Space Force is evaluating wearable devices from both manufacturers to monitor troops’ health.

“There’s increased responsibility on me, not just once a year to take a fitness test, for example, but maybe to exercise 90 minutes a week,” Bratton said. “The ring helps me keep track of that as well as my sleep patterns.”

Bratton said leaders want to emphasize health beyond physical activity so that Guardians are prepared to execute what their service requires.

“Many times fitness is used as a ‘go, no-go’ kind of thing — either you have it or you don’t,” Seballes said. “I know folks who can do all of their PT aspects and run a really fast mile and a half, and yet their eating habits are poor, their sleeping habits are poor. They’re not healthy.”

“This heightened focus on fitness or weight and shape at one time period may be associated with increases in body dissatisfaction,” said Lindsay Bodell, an assistant professor of psychology at Western University in Ontario. “People may be more aware of their bodies and their performance at that time.”

Bodell, whose research focuses on the causes of eating disorders, stressed the need for more studies before she and other researchers can confidently say the two are linked. It doesn’t help that passing an annual fitness test can be tied to career advancement and other military opportunities, she said.

“Having these consequences of not meeting the standard may lead people to engage in pretty extreme behaviors to meet those standards,” she said.

“If the emphasis continues to be on specific weight standards or weight regulation, we may still end up having similar consequences,” Bodell said, noting that many studies have found a connection between fitness tracker use and eating disorder symptoms.

“These types of constant monitoring and tracking of fitness could contribute to pressures to mold one’s body to unrealistic ideals,” she said.

Elizabeth Eikey’s research touches on that topic. An assistant professor at the University of California, San Diego’s Herbert Wertheim School of Public Health, she studies how technology, like fitness trackers and apps, affects mental health and well-being.

“For a long time the idea was more engagement with these tools — the more consistent you are, the longer that you use them — the more healthy you will be,” Eikey said. “But what we’re finding is that’s not necessarily true.”

Having more data on your health or fitness can undermine the kind of self-reflection that leads to healthier lifestyles, Eikey said, especially with higher-stakes goals.

That doesn’t mean she’s against the Space Force reevaluating how it measures fitness, though.

“Questioning the kinds of standards around fitness is very important,” Eikey said. “That’s an admirable thing to do. Are these technologies really the right way to do it?”

This story comes to us from St. Louis Public Radio and was produced by North Carolina Public Radio’s American Homefront Project, a public media collaboration that reports on American military life and veterans. Funding comes from the Corporation for Public Broadcasting.