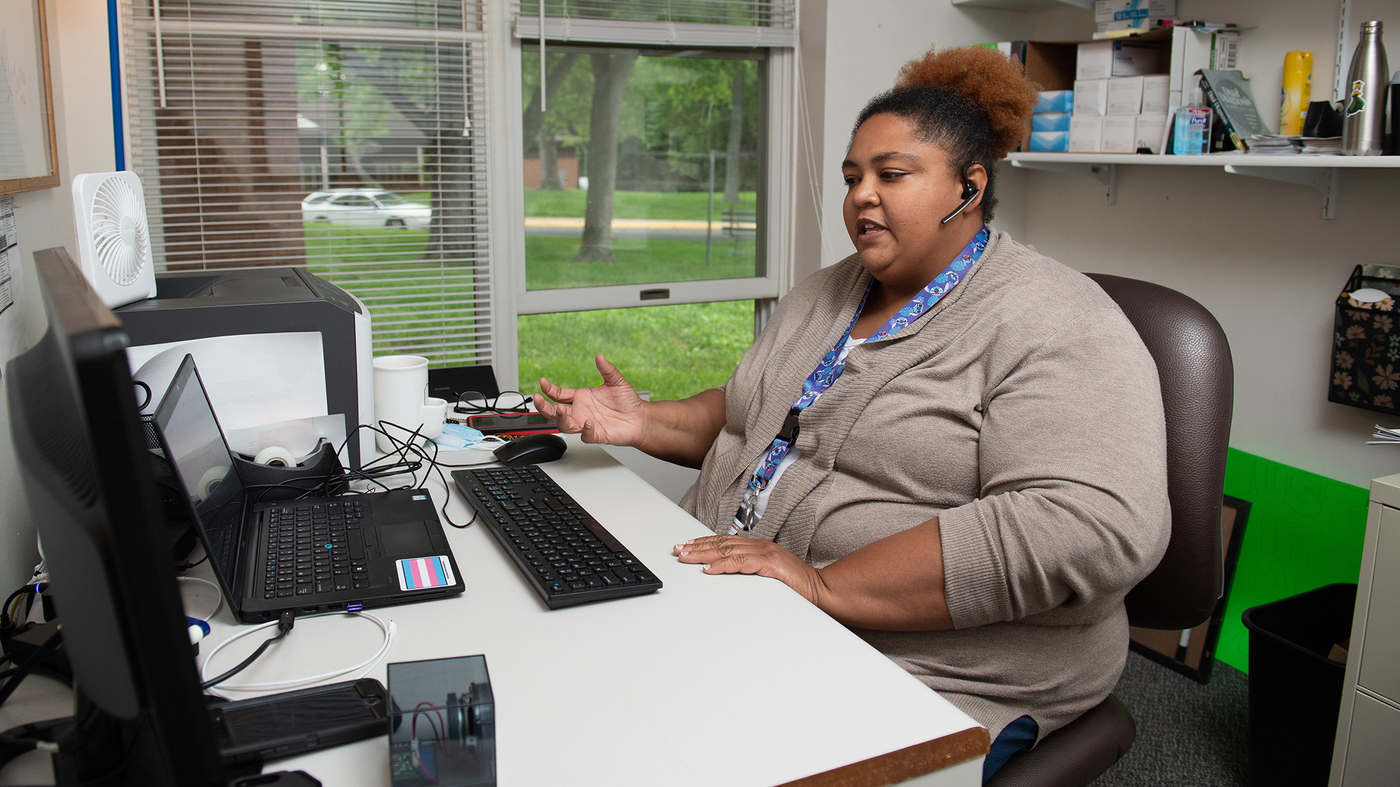 Staff at Memorial Behavioral Health in Springfield, Ill., are on call around the clock to talk with people struggling with suicidal thoughts, drug addiction or other mental health crises.

They provide a listening ear and help connect people to resources or crisis support, if needed.

Until recently, the hospital’s call center was operated by on-call nurses and other clinical staff. But at times when everyone was tied up with patients, calls would go unanswered, bumping the caller to the nearest available call center, often in another state or a national backup center.

“Staff would answer the phone 24/7, but if they were busy with intakes or with residents … then they wouldn’t be available to take the call,” said Diana Knaebe, president and system administrator of Memorial Behavioral Health.

Across the state, Illinois-based call centers answered just 1 in 5 in-state calls to the lifeline in the first three months of 2022. The other 80% were redirected to other states. Illinois has the lowest in-state answer rate in the nation, lagging far behind others. The state with the second-lowest rate, Texas, answered 40% of its calls during that same time period.

Letting so many calls go unanswered wasn’t ideal, but without state or federal support, Knaebe said it was the best they could do.

The center has since received federal funding to beef up their call center. It’s part of the rollout of a new national mental health crisis number, 988, that proponents hope will make it easier for more people to connect with the National Suicide Prevention Lifeline when it is launched on July 16.

Knaebe said the new funding enabled Memorial to switch to staffing the crisis line with dedicated employees instead of on-call hospital staff. Even though they’ve still got several open positions they’re trying to fill, she said they’ve already seen big improvements in their answer rate.

“In [April] where we did that, we were able to answer 80% of the calls versus 20% in previous months,” Knaebe said.

Following national trends, 3 in 10 adults in Illinois reported feeling anxious and depressed late last year, according to a survey conducted by the U.S. Census Bureau and analyzed by the Kaiser Family Foundation. Among this group, 24% did not receive counseling or therapy.

Prior to the pandemic, 17% of adolescents and 8% of adults in Illinois had a major depressive episode in the past year. Nationally this was 16% and 8%, respectively.

How underinvestment hinders the rollout

Preparations for the rollout of 988 are in full swing across the country, yet call centers are scrambling to hire people by mid-July, and some states have a lot of catching up to do. A study by the RAND corporation released earlier this month interviewed 180 behavioral health program directors and found that half had not been involved in any planning related to 988. A vast majority of respondents reported they had not helped develop a budget to support the lifeline.

In Illinois, underinvestment has plagued call centers for years. During the first three months of 2022, a quarter of callers — about 5,500 calls — dropped off before anyone answered.

The new crisis line is expected to send call volume soaring, and that means states like Illinois have a tough hill to climb, said Andy Wade, executive director of the Illinois chapter of the National Alliance on Mental Illness.

“You’re building on the platform of the suicide prevention line, which is a logical starting point,” Wade said. “But that’s been under-resourced in Illinois for so long that just ramping that up alone is far from sufficient.”

While other states dedicated funding to the lifeline, Illinois hasn’t followed suit, leaving call centers to rely on private donors and grant funding.

It matters because the National Suicide Prevention Lifeline automatically directs calls to the nearest call centers, and if no one answers, people may wait on hold while they’re transferred, said NAMI’s Chicago Director of Policy Rachel Bhagwat.

“And that’s really concerning for mental health advocates. I mean, when you’re talking about somebody who is in crisis or considering suicide,” she said.

If someone in Illinois ends up getting connected with a crisis counselor in Missouri or some other state, “How would that person … really be able to understand what the crisis system or mental health infrastructure looks like locally?” Bhagwat said.

John Draper, head of the National Suicide Prevention Lifeline, agrees calls are ideally answered in state. But he specifies the national center is ready to manage overflow.

“I can’t promise that no one is going to have any wait at all,” Draper said. “I can certainly say that if you hold on, you’re going to get answered and you’re going to be answered by a counselor that cares about your situation.”

Draper says while preparedness for 988 varies by state, he’s encouraged by the progress.

With only a few weeks until the national 988 rollout, Illinois-based call centers are trying to ramp up call center capacity as quickly as possible. A center in Bloomington, Ill., which has contracted with the state to handle a majority of calls to the lifeline, has hired over 100 employees.

But call centers across the country still have many openings available, according to a listing of 988 jobs compiled by the U.S. Substance Abuse and Mental Health Services Administration. Open positions include both crisis counselors and staff for mobile response units, which dispatch mental health professionals and paramedics instead of police to help people in crisis.

More than 129 million people in the U.S. live in an area that lacks enough psychiatrists to appropriately cover the population. And the concern goes beyond psychiatrists. It can take months to get an appointment with a counselor or therapist. For people who need more intensive interventions, there’s often no available placements in mental health facilities. So mental health experts say addressing mental health needs must go far beyond call center staffing to also include longer-term treatment options.

Federal funding to help scale up staffing at call centers includes $282 million from the American Rescue Plan, though only $105 million is specifically dedicated to that hiring.

But some worry about sustainability: Much of the funding dedicated so far will expire in a few years.

Mental health advocates in Illinois say they’d like to see the state step up and invest more in 988 preparations, and they need lawmakers to appropriate a consistent, long-term funding source. But so far that hasn’t happened.

To help with hiring, Memorial Behavioral Health has negotiated sign-on bonuses and offered to hire people who are still in the process of working toward their degree or certification.

“The state really didn’t invest in the call center piece at all,” said Knaebe, who used to lead the Illinois Department of Human Services Division of Mental Health. “It was all done by the individual providers, feeling that they wanted to be a part of it. That’s why we kind of did it makeshift.”

Illinois Department of Human Services spokeswoman Marisa Kollias said in an email that the state has distributed nearly $4.5 million in federal funding to be used by call centers over the next two years. Additional state funding from cannabis tax revenue and other federal sources results in about $7.5 million in annual spending on call centers. In addition, the state has a “$71 million obligation for crisis care continuum, which includes support of mobile crisis response.”