Home » Emergency contraception: How it works, how effective it is and how to get it 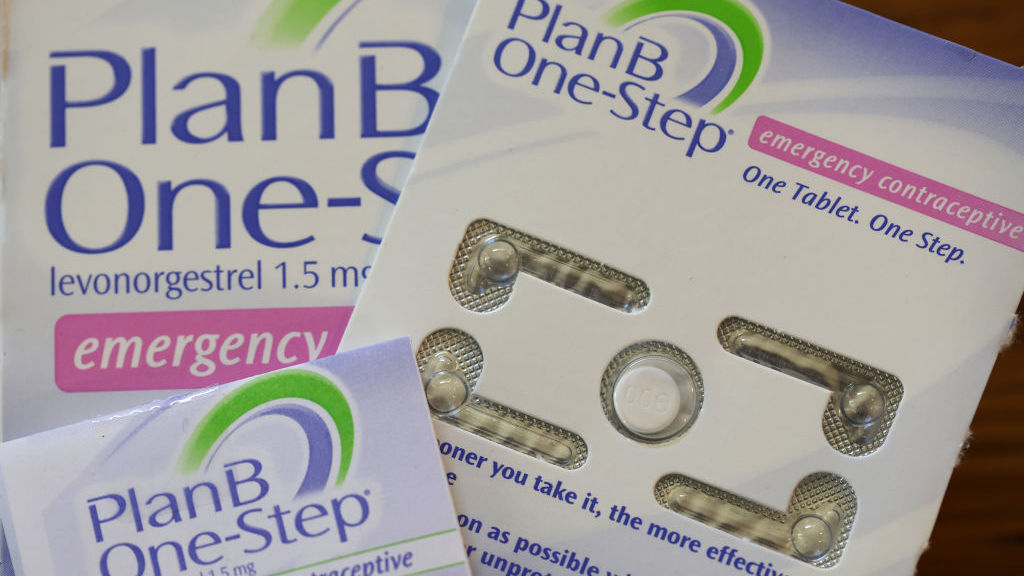 Emergency contraception: How it works, how effective it is and how to get it

Plan B is one brand of the emergency contraceptive levonorgestrel, which works by delaying ovulation. It is sold over the counter at pharmacies, but is often kept in locked boxes or is only accessible by asking a pharmacist.

Plan B is one brand of the emergency contraceptive levonorgestrel, which works by delaying ovulation. It is sold over the counter at pharmacies, but is often kept in locked boxes or is only accessible by asking a pharmacist.

With abortion getting banned or heavily restricted in many states, reproductive health experts say it’s important that both patients and providers know the options available when it comes to emergency contraception. For many people, it’s a final safety net against unintended pregnancy.

Many advocates suggest women and all those who can get pregnant have emergency contraception on hand before they need it. “It’s going to be really, really important for people living in states where that’s the last chance they have and they really need to prevent pregnancy,” says Cynthia Harper, a contraception researcher and professor of obstetrics, gynecology and reproductive sciences at the University of California, San Francisco.

But some emergency contraception options work better for certain people, and some options are more readily available than others. Here’s what you need to know.

What is emergency contraception and how is it different from the abortion pill?

The term refers to contraceptive options that are used after intercourse to prevent an unintended pregnancy from occurring. You might need it if you’d had unprotected sex, or if the condom broke or maybe you forgot to take a couple of birth control pills.

It’s not the same thing as a medication abortion or abortion pills, although that’s a common misconception, says Dr. Suzan Goodman, director of training for University of California Bixby Center’s Beyond the Pill program, which aims to promote access and equity in contraception health care.

Emergency contraception prevents a pregnancy from happening in the first place, she explains, while a medication abortion is used to end a pregnancy that’s already occurred.

What are the four kinds of emergency contraception?

Plan B or other levonorgestrel pills: The most commonly available form of emergency contraception are over-the-counter pills containing levonorgestrel, perhaps best known under the brand name Plan B, though it’s also sold under other brand names including Aftera, My Way, Take Action and others. It’s a single-dose pill, with no age restrictions and no prescription needed. It works best within 72 hours of unprotected intercourse.

Ella: The second kind of emergency contraception pill is ulipristal acetate, sold under the brand name Ella in the U.S. It’s a single-dose pill that requires a prescription. Research shows Ella remains effective throughout the five-day window after intercourse, says Goodman, unlike levonorgestrel which shows a drop in efficacy after day three. It’s also more effective for patients who weigh more than 165 pounds.

The copper IUD is “almost 100% effective as an emergency contraceptive,” says UCSF’s Harper. She says more recent evidence shows that hormonal IUDs — sold under the names Mirena or Liletta — are also effective.

Getting an IUD for emergency contraception has a huge added benefit, says Dr. Alison Edelman a professor of obstetrics and gynecology at Oregon Health and Science University. Once you have it in place, you have ongoing effective contraception. IUDs are effective for three to 12 years depending on which one you get.

Where can you buy emergency contraception?

Even though levonorgestrel pills like Plan B are over the counter and supposed to be stocked on store shelves, studies have found that in practice, they’re often stored in locked display boxes or behind the counter, so you may have to ask the pharmacist for them. You can also order them online, though you’ll have to wait for them to be delivered, which means this might be a better option if you’re looking to stock up to have it on hand just in case.

As for Ella, you need a prescription to get it. Studies have found that Ella is very rarely in stock in pharmacies – they usually have to order it. That’s why many reproductive health experts advise that doctors give patients a script for it ahead of time. Companies such as Nurx, SimpleHealth and PRJKT RUBY offer telemedicine appointments for women who need a prescription for Ella.

“We really want to encourage patients and also health care providers to have this conversation all the time to make sure that people have emergency contraception on hand when they need it,” says Kelly Cleland, executive director of the American Society for Emergency Contraception.

Ulipristal acetate, sold under the brand name Ella in the U.S. is a single-dose pill that requires a prescription. Research shows Ella is effective throughout the five-day window after intercourse.

Ulipristal acetate, sold under the brand name Ella in the U.S. is a single-dose pill that requires a prescription. Research shows Ella is effective throughout the five-day window after intercourse.

How does emergency contraception work?

Both of the pill options, Plan B and Ella, work by delaying ovulation so an egg isn’t released until sperm are no longer viable. IUDs work primarily by preventing fertilization, so even if the egg is released, it never combines with the sperm.

When used as emergency contraception, Edelman says copper IUDs release copper ions that are toxic to sperm, creating a kind of “hostile environment” preventing them from reaching or fertilizing the eggs. She says there’s less evidence on the exact mechanisms at work with hormonal IUDs, but they likely disrupt how egg and sperm are transported in the body, so that they don’t meet up.

Edelman notes that because there is still some uncertainty about how hormonal IUDs work as emergency contraception, that if you are at the highest risk of getting pregnant because you’re in the middle of your cycle, you may want to take one of the pill forms of contraception at the same time that you get your hormonal IUD.

How quickly after sex do you need to use these methods?

If you’re using pills, the sooner the better. “Most folks really don’t know where they are within the cycle. They don’t know if ovulation is tomorrow or the next day or tonight,” says Cleland of the American Society for Emergency Contraception. That means you could miss the window to prevent ovulation if you delay taking the pills, and might get pregnant anyway.

For the IUD, it’s also important to get it placed within the five-day window after unprotected sex.

Are some forms of emergency contraception more effective for people with higher weight?

Yes. Evidence suggests that levonorgestrel pills like Plan B don’t work as well in patients who weigh more than 165 pounds. For them, Ella is a better choice – it works well in people up to 195 pounds. Of course, Ella requires a prescription, which can be a barrier to access, because the clock is ticking for these medications to work. For those who weigh more than 195 pounds, IUDs are the most effective choice.

If you can’t get ahold of Ella or an IUD quickly enough, one other option might be to take a double dose of Plan B. Edelman, who has studied the relationship between weight and emergency contraception, says there isn’t clear evidence that double dosing works, but it’s not dangerous. “If it were me and I was in urgent need of [emergency contraception], I would take a single or a double dose as opposed to doing nothing,” she says.

Edelman says there are also some places like family planning clinics, Planned Parenthoods or university health centers where women might be able to get same-day IUD placements as emergency contraception.

A copper IUD is almost 100% effective as a form of emergency contraception.

A copper IUD is almost 100% effective as a form of emergency contraception.

How much does emergency contraception cost and does insurance cover it?

Federal law requires that most insurance plans cover prescription contraception, including IUDs, without cost sharing for the patient, though there are some exceptions.

Plan B and its generics are not generally covered by insurance because they are over-the-counter medicines. They generally retail for around $40-$50. You may also be able to get it discounted or for free from Planned Parenthood. You can often find levonorgestrel pills a lot cheaper online if you’re ordering in advance to have them on hand. One other idea: If your doctor writes you a prescription for Plan B, then insurance will cover it.

Ella costs around $50 or more at the pharmacy, but it may be covered if you have health insurance or Medicaid. You need to get a prescription from a health care provider.

IUDs need to be inserted by a trained technician and the procedure and the device should be covered by insurance. If you have to pay for an IUD out of pocket, it’s around $1000 or more.

Is emergency contraception legal in places where abortion is banned?

Yes, though reproductive health advocates are worried that legislators in conservative states that ban abortion will target some forms of emergency contraception next. That’s because language on the label says levonorgestrel may interfere with implantation of an already fertilized egg. This was based on old science, says Cleland; a body of evidence now shows the drug works by stopping ovulation, and reproductive health experts are calling for the Food and Drug Administration to change this label. “We need to ensure that these product labels are in line with the scientific evidence,” says Cleland.

Yes. Emergency contraception pills work by delaying ovulation but if you had already started to ovulate before you take them, it might be too late to prevent a pregnancy. It can also fail if you continue to have unprotected sex in the same month — after the emergency pill’s effects have worn off you can still ovulate again if you’re not on an effective form of primary birth control, cautions Edelman. This is why it can be a good idea to get an IUD immediately after unprotected sex, even if you did take pills, she says: “We know that getting birth control on board immediately helps prevent pregnancy in that cycle”

Is there an age limit for getting emergency contraception?

No. There once were age restrictions on the pills but those have all been removed, says Cleland. For IUDs there may be state laws requiring parental consent for minors.